Deciding on whether to purchase or lease a vehicle is a complex decision.  One must weigh emotional and economic factors, cash flow and the tax implications, assuming the vehicle is used for business.  Many websites allow you to compare the economic impact of a lease or purchase. Some useful sites include Kelley Blue Book, Bloomberg, LeaseGuide, and Yahoo Autos.

Technology and various fuel/ power sources are advancing faster than most people can comprehend. Whether your business needs a vehicle that gets the highest miles per gallon, has the longest range per tank or charge, coolest look, fastest top-end, a vehicle that can take half a soccer team to and from the next practice, or the lowest operating cost per year, there are hundreds of choices.

On average, 30 to 50 percent of a vehicle's value evaporates during the first three years. Another 25 to 30 percent of value disappears during years four and five. This estimated market decrease, or depreciation, is built into each monthly payment on a lease. However, when purchasing a vehicle, the buyer bears the entire risk of value decreases when you sell the vehicle.

The Benefits of Purchasing Vehicle

To claim a tax benefit, the vehicle must be used for business or charitable purposes throughout the year (other than DMV fees or possibly sales tax reported on Schedule A). The deduction per business mile is $0.54 for 2017 and $0.14 for each charitable mile.

While purchasing a business vehicle can result in lower costs as a result of tax benefits, taxpayers need to understand certain limitations on depreciation deductions which can severely impact the annual tax breaks – especially on more expensive vehicles.  If the vehicle has a Gross Vehicle Weight (GVW) of 6,000 pounds or less, it is considered a passenger vehicle. Triggering the luxury auto limitations can restrict the amount of the depreciation deduction available in a given year and lengthens the time in which the full tax benefits of depreciation can be realized.

In 2017 a taxpayer purchasing a typical passenger vehicle cannot deduct more than $3,160 in the first year of use without the use of §179 expensing (IRC Section 179) or Bonus Depreciation (discussed below). This limitation on passenger vehicles can potentially stretch the tax recovery period to over 20 years on a $50,000 vehicle. The aforementioned first-year limit increases to $11,160 for buyers eligible for the §179 expensing and/or Bonus Depreciation.

If the vehicle has a GVW between 6,001 and 14,000 pounds, there is significantly more tax benefit available in the first year. Such vehicles include many SUV’s, trucks and even a Rolls Royce and or a Bentley. Vehicles over 6,000 pounds are eligible to take full advantage of the accelerated depreciation methods discussed below.

Eligibility for both §179 expensing and Bonus Depreciation requires that the vehicle is used 50 percent or more for business purposes. In the instance that business use falls under the 50 percent threshold in a later year, the excess expensed amounts (vs. normal five-year depreciation) will trigger recapture in the later year. Both methods are federal concepts and may not be allowed in all states.

Tax Benefits of Leasing a Vehicle

Generally, leasing a vehicle would make the most sense for a higher priced passenger vehicle that is held for a relatively short period, such as two four years, as well as for new car models without long track records. Leases allow consumers to return vehicles after a specified lease period. Even with some additional economic inefficiencies for the lessee, less money is generally required at the start, and less money is tied up under a lease over the ownership period as compared to a purchase.

Other reasons to lease a vehicle include minimizing the risk of changes in the economy, fast paced technology changes, color/body style changes or gas price fluctuations, all of which can reduce resale/ residual values. If fuel prices jump up in future years, you will be much happier having leased a gas guzzler now vs. purchasing it.

Since you do not depreciate a vehicle subject to an operating lease, the depreciation limits and §179/ Bonus rules do not apply to leases. However, only the business use percentage of the lease payment is potentially deductible. Further, for passenger vehicles, the tax law requires an auto lease inclusion, or add-back, when a leased vehicle's value exceeds $19,000. This inclusion has less impact than the aforementioned depreciation limits. For example, a $50,000 passenger automobile (36-month lease) acquired in 2017 with annual lease payments of $10,992 would generate a taxable income add-back of only $63 in 2017, for a net tax deduction of $10,929. This assumes the vehicle was used  100 percent for business.  Since the lease payments include sales tax, depreciation, and other costs, the tax-deductible amount (per dollar outlay) under a lease is typically higher than a purchase. The add-back is not required in the case of SUV’s and other heavy vehicles.

Electric vehicles generate enhanced tax benefits. The Plug-In Electric Drive Vehicle Credit (claimed on IRS Form 8936) allows designated vehicles with a 4 kilowatt or larger battery to receive a tax credit. The credit ranges from $2,500 to $7,500, depending on the size of the battery in the vehicle. You can only claim this credit on newly purchased vehicles under 14,000 pounds. Other potential incentives exist, such as rebates at the state level applicable to purchased and leased vehicles. One example is the Clean Vehicle Rebate Project in California, with up to a $5,000 rebate upon an accepted application.  Utah provides a credit that varies by type of vehicle and specific power source and applies to purchased, leased, or converted vehicles (see form TC-40V). 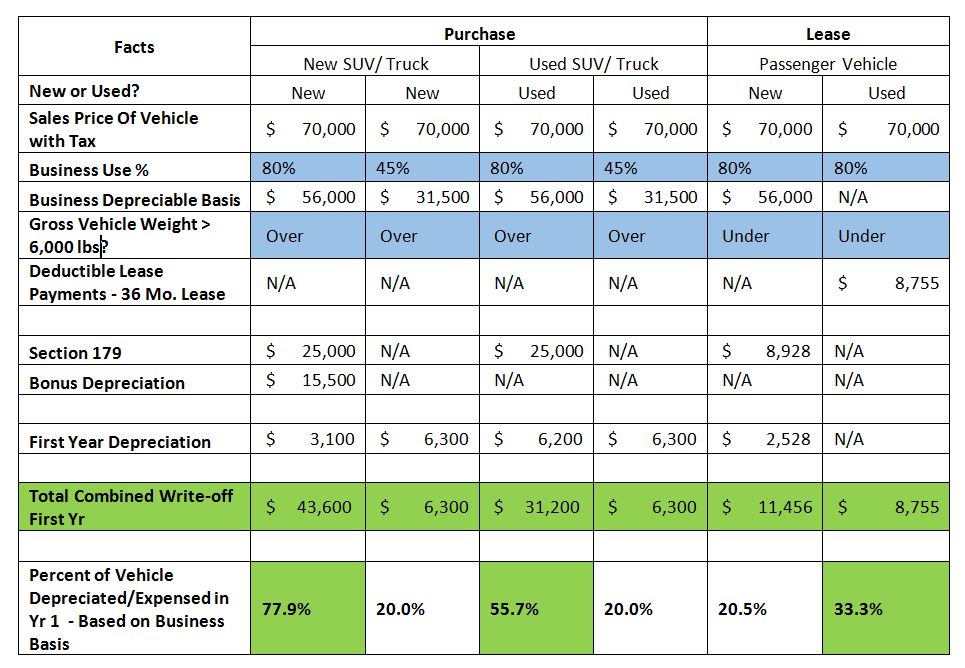